So I did some “research” last night. By which I mean, I went out and bought a bunch of beer and drank some of it. I’m trying to figure out what to homebrew next, and one of the candidates is a milk stout. Basically, I wanted to make a beer that was sweet and chocolately, with some roastiness thrown in and maybe some other complementary flavors (caramel!) Definitely not coffee, as that’s one flavor I just can’t get into. So looking around, there are a number of imperial stouts that might match my criteria, but I didn’t want to go for a really high O.G. beer, so I kinda settled on Northern Brewer’s Milk Chocolate Stout. It sounds pretty great, but I wanted to try out some milk stouts before I really committed to brewing a full batch of this stuff.

A trip to Pinocchio’s later, I have a few milk stouts to try out. First up is this beer, bought on a whim: 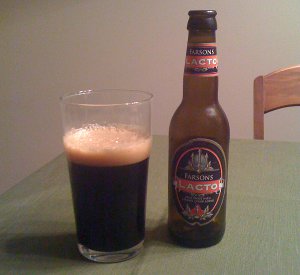 Farsons Lacto Traditional Stout Beer – I didn’t initially realize it, but this beer is made in Malta. The label looked very European, maybe British, so I kinda assumed that’s what I was getting. Apparently the brewery’s origins come out of a desire to serve a British Garrison stationed in Malta, so I guess the marketing department did it’s job. Then again, the beer is named “Lacto”, which ain’t exactly a pleasing name… The beer itself pours a deep black color with a couple fingers of big-bubbled, quickly-disappearing head. Smells unexpectedly of raisins and not much else, though there is a strange mustiness that I could sometimes pick up. The sweet raisins are in the taste as well, and something chalky or tinny (hard to describe – not a pleasant flavor though), but none of the usual stout flavors – no roastiness, no chocolate, no caramel, no forward bitterness, though something is clearly balancing out the initial sweetness, making the finish dry. The raisins show up again in the aftertaste. The moutfeel is kinda weird too – it’s not very well carbonated and it’s also a relatively light bodied, almost watery beer. Now, it is a very low ABV beer, but that’s usually why lactose is used – to add body to a low ABV beer. This whole thing is very strange to me. Even throwing out my expectations of a stout, this doesn’t really work well as its own beer either. D

Well, this is certainly not a beer that I’m looking to emulate, I can tell you that. Fortunately, I don’t think the recipes I’m looking at are this bizarre. I had another milk stout this weekend that was much better though, so I think there’s still hope. Hopefully that review will be up tomorrow.