While the concept of a “Grand Cru” is formally defined for wine, there’s little to distinguish it from a marketing tactic in beer. Nothing particularly wrong with that, it’s just good to know that beery Grand Crus are not quite as reliable. But most brewers do try to make their Grand Cru special in one way or another, and when a brewer of the stature of Almanac introduces a series of beers with the designation, it’s enough to pay attention.

So far, there have been two released, one of which we have here. Farmer’s Reserve Grand Cru is an imperial version of their sour blonde ale (and base for a whole series of fruited sours that we very much enjoy here) with California-grown Muscat Blanc grapes added and then aged in white wine French oak barrels for over a year. Finally, it’s packaged in a gorgeous looking bottle. There’s been this persistent myth that beer and wine people don’t get along, but California brewers seem to be continually turning that notion on its ear, frequently collaborating with their neighbors in many ways. This sort of beer/wine hybrid isn’t on every shelf, but it’s not particularly uncommon either, and it’s always fun to see what happens when boozy buddies take inspiration from one another. “As the old saying goes, in vino veritas, in cervesio felicitas – in wine there is truth, in beer there is happiness.” With this, I think they’ve hit both nails on the head: 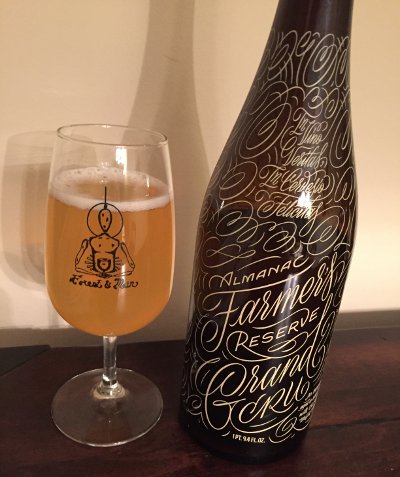 Almanac Farmer’s Reserve Grand Cru – Pours a light, hazy golden yellow color with a finger of white fluffy head that sticks around for a bit. Smells wonderful, lemon zest, vinous fruit, white wine, oak, very nice. Taste is more reserved than the nose might lead you to believe, but it’s got tons of that vinous fruit, white wine barrel, some tart acidity lingering in the finish. Mouthfeel is moderately carbonated, medium bodied, light to medium acidity, a bit of boozy heat, and just a bit of stickiness in the finish. Despite the booze, this does not drink like a 10.2% sour, it’s pretty light on its feet. Overall, this is really fantastic stuff, certainly worth seeking out. A-

The other release is Dogpatch Grand Cru, basically an imperialized version of their Dogpatch Sour made with a variety of red wine grapes (instead of the typical cherries), which I plan to share with a few friends soon. As usual, Almanac is a reliable source of excellent sours that are readily available in Philly these days (which is certainly a boon).