Local brewers like Tired Hands, Forest & Main, and other more obscure brewers have been killing it with barrel aged sours for the past few years. Barrel aged stouts? Not so much. This is a topic we’ve discussed before, but with a few quasi-one off exceptions, there’s not much going on. A few mid-tier regular releases make the rounds every year, but they’re dwarfed by the monsters of the genre. So basically, I’m always on the lookout for new barrel aged beers, just like 60s Spider Man:

Neshaminy Creek is a local brewer of growing repute. They put out lots of respectable takes on typical styles, and have occasionally transcended the standard. They’ve also done a fair amount of barrel aging that, for reasons mostly having to do with laziness, I’ve been sleeping on. However, I actually had the first batch of Bourbon Barrel Aged Leon (the base is their popular smore beer that was, frankly, not my favorite). It felt a little boozy and bourbon forward, but a decent enough improvement over the base. Still, my thought was the the base was a little too dry to really take on that great barrel character I love so much in a BBA stout. File that under my growing list of unsubstantiated and wildy speculative theories on barrel aging that I should really compile into one post sometime.

Anywho, that first batch was aged in Wild Turkey barrels, and this most recent batch was aged in Buffalo Trace barrels. Small, 600 or so bottle release, but a generally low pressure affair, as, alas, this new batch feels pretty similar to the last batch. Which is to say that it’s a pretty nice improvement over the base, but it doesn’t quite stack up to top tier stuff. Still worth the trip to their brewery though, and I’d be curious how time treats this one: 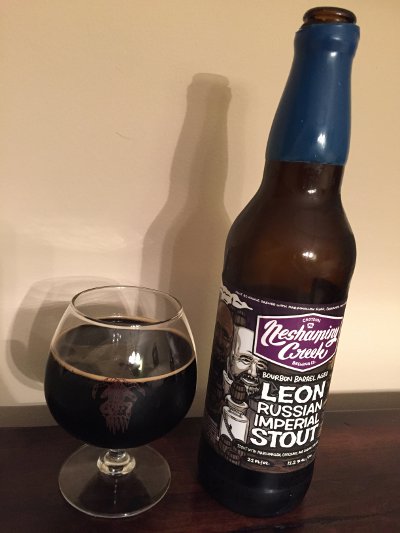 Neshaminy Creek Buffalo Trace Barrel Aged Leon – Pours a deep black color with a half finger of tan head. Smells of pure vanilla and bourbon, some oak, caramel, and maybe a little fudge. Taste is dominated by that bourbon barrel, lots of bourbon flavor, some caramel and vanilla, hints of chocolate, finishing with a bourbony kiss. Mouthfeel is well carbonated, more attenuated than your typical stout (not watery, but not quite as full bodied or rich as you’d expect), a little boozy. Overall, it’s a solid BA imperial stout, not going to set the trading boards on fire, but it was worth the trip up to the brewery to pick up a couple bottles, and it’s quite tasty. B+

Still very curious to try out some of their other barrel aged stuff, including Neshaminator aged in Rum Barrels (prophesied to be coming soon) and any of their Concrete Pillow barleywine variants. But I’m still on the lookout for a regularly produced local BBA stout that can compete with the big boys. Maybe Tired Hands’ proper bourbon barrel version of Only Void (previous attempt was in small Dad’s Hat Rye barrels) will scratch this itch. In the meantime, I’ll have to trade out for some bigger, badder stuff.