Four Roses currently enjoys quite a popularity amongst the beer nerd community, some even going so far as to place them at the top of all bourbon distilleries (above Buffalo Trace and their Pappy juice, zomg). During last year’s hiatus from beer, I tackled Four Roses standard Single Barrel offering, and was suitably impressed, noting in particular my appreciation of the openness Four Roses displays with their recipes. It makes the homebrewer inside me all tingly.

Four Roses has three standard labels. The Yellow Label is a blend of all 10 recipes, and their basic, 80 proof, everyday bourbon. There’s the aforementioned Single Barrel, and a standard Small Batch bourbon, which is a vatting of a few recipes. They have some special releases of Small Batch that are released at cask strength and include well aged stocks (plus, the blend changes from year to year), which seem to be approaching Pappy level hype amongst the hardcore beer nerds (I believe the PA allocation sold out in 10 minutes or so). Then there’s their Private Selection program, where various restaurants, bars, and liquor stores are able to purchase a single barrel and get the cask strength juice bottled exclusively for them.

This is what I have here, from the beer nerd paradise of State Line Liquors (in all honesty, they seem like a great whiskey and wine store as well). While many of these barrels use various recipes, State Line chose a barrel that happened to be the same recipe as the standard Single Barrel: OBSV (high rye, expressive yeast). This makes for an interesting experience for a relative newb like myself, as I get a chance to see exactly what the differences are in this higher proof and slightly older whiskey.

While I was at it, and since I was just at the end of this year’s hiatus from beer, I used the opportunity to crack open another Eclipse Stout variant, aged in, you guessed it, Four Roses barrels. FiftyFifty does not specify which recipe they used for their barrels (and in all honesty, it could be that they used several barrels and just blended it all together in the end). Regardless, my affinity for this series of barrel aged stouts is well documented, and I never tried sampling the bourbon next to the beer aged in that bourbon’s barrels. It was fun, so let’s not waste any more time: 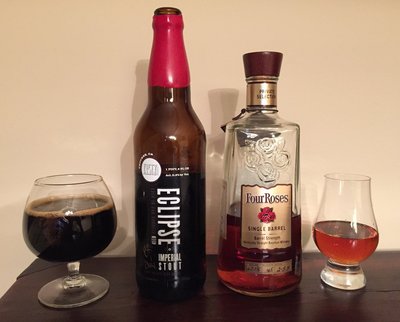 Four Roses Private Selection Single Barrel Bourbon (State Line Liquors) – Pours a burnished golden orange brown color (let’s call it copper), with legs that go all the way up (whatever that means). Beautiful nose, deep oak, rich caramel, nice spicebox component, cinnamon and the like, and that fruity bubblegum character that seems to wind its way through all the Four Roses expressions (thanks to my friend Padraic, I can’t not notice it now). This might be my favorite nose on any whiskey I’ve ever had. Not that I’ve had a huge number of whiskeys, but still, I could just keep my nose buried in this glass for hours. Taste hits the same notes with varying strength, lots of oak, good dusting of spicebox, some rich caramel, hugely boozy in the finish. Mouthfeel is viscous, mouth coating, full bodied, almost chewy, and sooper boozy. I don’t even think this is my baby beer palate speaking here, I suspect most folks add some water to this at some point. At 62% ABV, it’s not exactly an everyday whiskey. When I added some drops of water, the palate softened a bit, but then, so did the wonderfully intense nose. Overall, it’s a fabulous bourbon, one that approaches the top of my (admittedly paltry) list. Significantly more intense than the regular Single Barrel. Compared to the other cask strength Bourbon I tried recently (Maker’s Mark), this is the clear winner by a mile. A- 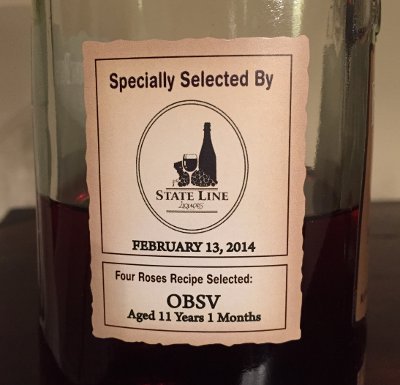 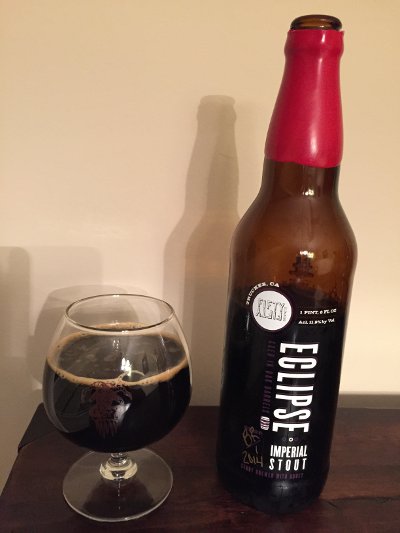 FiftyFifty Imperial Eclipse Stout – Four Roses – Pours a deep black color with a finger of tan head. Smells of roasted malt, with some vanilla and oak peeking through, but surprisingly little in the way of bourbon. Taste is sweet, with a little bit of that roasted malt character coming through, maybe some dark chocolate, again surprisingly little in the way of bourbon, though the oak and vanilla do show up (not as prominently as other variants, but they’re there), and a little bitterness in the finish. Mouthfeel is full bodied, but not as rich or chewy as other expressions of Eclipse. Overall, this reminds me a bit of the Elijah Craig Eclipse in that it retains more of its base character and the barrel notes are minimized. Still, I don’t think this one quite hits the high of Elijah Craig, even if it is pretty darn good. On the lower end of A-

Beer Nerd Musings: This pairing was less fruitful than expected. Perhaps the quick sample of the real thing ruined my palate for the beer, but I just wasn’t getting a lot of Bourbon out of the beer. Not sure what this means. One of the interesting things about the Eclipse series is that the beer spends just about the same amount of time in the barrel, no matter which barrel we’re talking about. So beer aged in Rittenhouse Rye barrels (i.e. relatively young barrels that impart a lot of oak and vanilla) ages for the same amount of time as the beer in Evan Williams 23 barrels (i.e. really old barrels that impart more straight bourbon than oak or vanilla). In this case, I’m not positive what’s going on. There’s a fair amount of oak, but not much straight bourbon character.

One of these days, I’ll put together an Eclipse horizontal tasting and try a bunch of these suckers side-by-side to see what’s up. I’ve got a few of these suckers laying around, so I think I’m going to try and make that happen in the near future. Ish. Anywho, this marks my triumphant return to beer, so look for a couple more reviews this week. Also, comments are working again. Feel free to tell me how little I know about bourbon.

4 thoughts on “Total Eclipse of the Four Roses Single Barrel”