At this point, I shouldn’t be so surprised when another Eclipse variant does something unexpected, but here we are. The different expressions of whiskey really bring out distinct flavors from the base beer. Some leave a lot of roast from the base beer, others contribute huge bourbon, oak, and vanilla notes of their own. A couple fall somewhere in the middle of those poles. Then you’ve got the bourbon forward take. This time, we’ve got Woodford Reserve barrels that really bring out a chocolatey character in the beer (it reminded me of Huge Arker, but with more bourbon and oak retained in the finished product.)

Woodford Reserve seems to be a sorta mid-level bourbon. A step up from the standard labels and readily available, but not a face melter. I’ve had it before, but it honestly didn’t make much of an impression (I’ve never bought a bottle, so I only had a single taste once). This particular variant of Eclipse seems to be rather well received though, so let’s take a closer look: 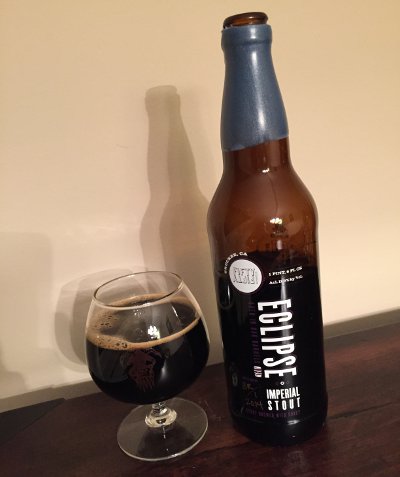 FiftyFifty Imperial Eclipse Stout – Woodford Reserve – Pours a very dark brown, almost black with a finger of light brown head. Smells great, bourbon, oak, vanilla, caramel, maybe even faint hints of fruit. As it warms, an interesting (and uncommon for Eclipse beers) chocolate fudge aroma emerges. Taste is full of rich caramel up front, with the bourbon, oak, and vanilla emerging in the middle, finishing with hints of roast and char and a boozy bourbon bite. Again, as it warms, that chocolate fudge character comes out to play, really interesting. Mouthfeel is full bodied, rich, and chewy, well carbonated, some pleasant booze. Overall, this is a great barrel aged stout and one of the more distinct variants of Eclipse A-

At this point, I’ve amassed a large enough collection of other Eclipse variants that I’m going to try and put together a comparative tasting. If all goes well, it will probably be in a month or so, so keep an eye out. In the meantime, I’m planning on trying a Four Roses variant next to some Four Roses bourbon, which should be fun!