Beer has a reputation. It’s the drink of the working class, and as such, many of the craft beers out there play up subversive or lewd aspects in their marketing. Indeed, this is part of the appeal of craft beers, an indicator of non-snobbery. Unfortunately, this often translates into horrible names or sexist labels, but Firestone Walker managed to walk a fine line with this one.

As the story goes, Firestone Walker had frequently released a tap-only oatmeal stout called Velvet Merkin back in the day. They changed up the recipe frequently and once they settled on something they really wanted, they had trouble getting the label approved (for the uninitiated, a “Merkin” is a pubic wig!) So in 2010 they pivoted and released the beer, a svelt 5.5% ABV Oatmeal Stout, as Velvet Merlin. However, they continued to try and get the Velvet Merkin name approved, this time applying it to an amped up, barrel aged version of Velvet Merlin. What we end up with is the current incarnation of Velvet Merkin, an 8.5% ABV oatmeal stout aged in a variety of barrels (the 2014 vintage used Elijah Craig and Woodford Reserve bourbon barrels as well as some Rittenhouse Rye barrels). So yes, a little crude, but Firestune’s packaging is it’s usual classy self, and the inclusion of a little grey triangle is actually quite brilliant – this is my kinda lewd and subversive.

This has long been on my list of beers to catch up with, ever since I missed out on it back in 2012 (and had to settle for, gasp, Parabola), so I was most excited to secure a bottle. In truth, this might be the lowest ABV bourbon barrel aged beer I’ve ever had. Does that work? Only one way to find out: 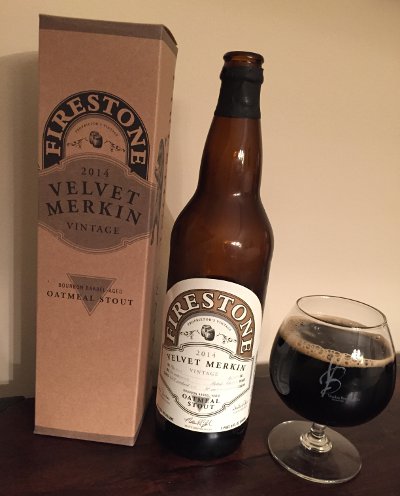 Firestone Walker Velvet Merkin – Pours a very dark brown color with a finger of light tan head that sticks around a bit. The nose definitely goes light on the barrel character, lots of roast and coffee aromas, maybe some chocolate and hints of caramel and vanilla. The taste hits a little harder on the barrel character, faint bourbon, a nice amount of vanilla, a little roast in the middle yielding to a bit of caramel, some milk chocolate, and coffee in the finish. Mouthfeel is well carbonated but smooth and almost creamy, not as heavy or rich as your typical bourbon barrel aged beer, a little drier too. This makes it less of a sipper, though it’s not really something you want to chug either. The barrel character really is rather light. Overall, this is an expertly crafted, well balanced barrel aged beer. There are some who would prefer this sort of thing to Parabola, but alas, those people are not me. B+

I can’t say as though I’m disappointed by this beer, but it’s definitely not quite the amazing I was hoping for and expecting. That being said, Firestone Walker’s barrel program is still held in high esteem here at Kaedrin, and you’ll be seeing a couple more barrel aged wonders form these folks in the near future. Stay tuned!