The beer nerd line these days is that pumpkin beers are mere gimmicks and they come out too early and pumpkin spice is an evil abomination that infects everything with its misery and that beer buying is a zero sum game and if there are pumpkin beers on shelves that means I can’t buy other beer. Or something like that. To be fair, my interest in pumpkin beer has waned in the past couple of years and there are legitimate reasons to not like the style, but I like to get in the spirit of the season at least a little every year (and while some brewers around here do Fresh Hop beers, we don’t have it quite as good as the West Coasters or, in particular, the Pacific Northwest). Sometimes this is a big win, most of the time, perhaps not as much. About a month ago, I wound up at a friend’s house and he broke out a bomber of Pumking and I could have sworn I liked this better before. When I think about it, most of my favorite pumpkin beers are not your traditional style. Stuff like a stouts or weizenbocks or whatever Autumn Maple is seem to be more my thing.

Schlafly Pumpkin Ale appears to be a straightforward pumpkin ale. No wacky yeasts or imperial stout malt bills, just a good old fashioned amber base with pumpkin and spices. It does have a decent reputation though, so I figured I’d give it a shot, and I was quite pleasantly surprised to really enjoy this. After all, it is Decorative Gourd Season, Motherfuckers, so it’s always nice to have something legit to drink along those lines: 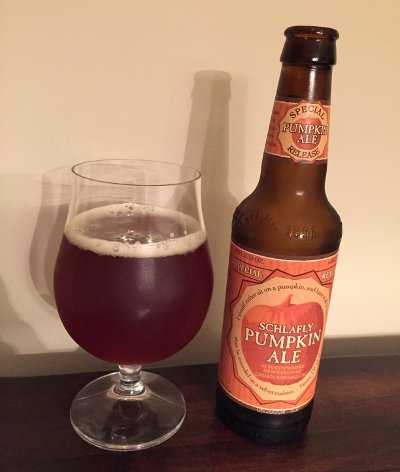 Schlafly Pumpkin Ale – Pours a very dark amber color with a finger of off white head. Smells of pumpkin pie spice, lots of cinnamon and clove, no detectable ginger (which is a good thing in my book), with some other spicy aromas floating around. Taste has a nice, substantial malt backbone to match with the pie spice from the nose, which picks up in the middle and lasts through the finish. Mouthfeel is medium to full bodied, but it’s got a significant carbonation that cuts through all that. Overall, this is an extremely well balanced Pumpkin beer. It’s complex, but none of the elements overpower, and it’s very tasty. B+

Schlafly has always put out pretty solid beer, and this is no exception. At this point, I’m really curious to try their Christmas beer. And, of course, the BBA Imperial Stout (which I used to see around a lot, but not at all lately, weird).