Most breweries will have an American Pale Ale in their portfolio. Three Floyds has ten. Alright, that’s a bit disingenuous, as looking closer at a few, I see a couple things that may have only been made once or in extremely limited quantities for special events. On the other hand, two of their most popular beers, Alpha King and Zombie Dust, are featured amongst the ten along with several other popular offerings, and I’m not including the similar stuff like Gumballhead (a pale wheat ale). Plus, it’s not like Three Floyds shies away from regular old IPAs and Double IPAs, which represent a similar proportion of their output.

They like hops, is what I’m trying to say. So all these pale ales have to have some differentiation, and in this case, we’ve got a beer made primarily with Michigan hops. This is not that far from Three Floyds, which is situated in the northwest corner of Indiana, and thus somewhat local. Alas, Michigan is not exactly known for their hops. As per usual, Three Floyds does not really mention what specific hop varieties are used, but I’m guessing it’s along the lines of classic American C hops like Cascade, Centennial, or Chinook. There is, of course, nothing wrong with that, and it’s probably a good idea to decentralize hop production in the US (which is currently centered on the Pacific Northwest), but it means that this beer probably won’t be blowing the hats off of snobby beer nerds in the way that Three Floyds manages to do with many of their other beers, like the Citra-based Zombie Dust.

But I’m a big tent guy, and when you have ten pale ales, you have to differentiate them somehow, so let’s drink some Michigan hopped beer, least that aggressive looking gentleman-o-awe on the label get angry. 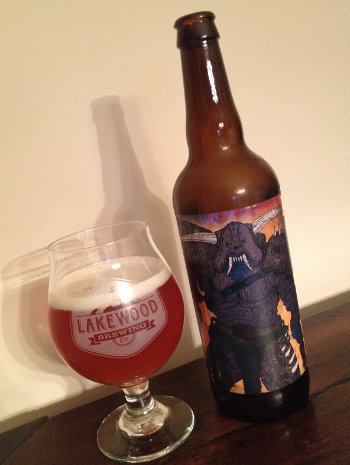 Three Floyds Man-O-Awe – Pours a bright orange/amber color with a finger of fluffy white head. Smells of straightforward citrus and pine hops, with some grassy notes and a little crystal malt hanging around to say “Hi”. Taste goes along similar lines, decent malt backbone, with crystal malt doing its thing, and plenty of grassy citrus and pine from the hops hitting in the middle, with a slightly bitter, pretty standard pale ale finish. Mouthfeel is on the lower end of medium bodied, and it sorta thins out towards the finish, which has a slight drying aspect to it that makes it go down rather quickly. Overall, this is a pretty standard pale ale, which would be fine, except you know, Zombie Dust. B+

Damn, this was almost three months old by the time I got to it… but then, I still rather enjoyed it. I suspect it would be even better fresh. Speaking of which, I’ve nearly exhausted my Three Floyds beer supply. They were mostly hoppy, so I wanted to get through them pretty quickly… I feel like I’ve been really hitting the hops pretty hard over the past month, so bear with me. We’ll have plenty of other interesting stuff in the near future…