While it’s easy for a homebrewer to pop over to a shop and purchase all the ingredients needed to make a beer, things are a bit more complicated for larger scale brewers. Ingredients like malt and hops are often purchased under contracts that need to be signed years in advance. Small or new breweries are often squeezed out of the most popular hops because they’re all contracted out for several years. That being said, sometimes small quantities of popular but supply constrained hops will often become available. If you’re a tiny brewpub operation that is constantly churning through new brews (a la Tired Hands), you can probably swing that sort of inconsistent approach. But if you’re a larger brewer (and believe it or not, most are), that small amount of hops might allow you to make one batch of beer, but not more.

Hopstitution is Jack’s Abby’s answer to this conundrum. They’ll make the same recipe, a 5.5% ABV extra pale lager, with every batch, only varying the hops based on what’s available. What I have here is batch four, made with Australian hops (the label sez Aussie Rulez). Specifically, this was made with Ella, Topax, and Galaxy hops. I’ve actually not even heard of Ella or Topax, but Galaxy is one of the trendiest and thus supply constrainediest of hops, so let’s see how this little experiment pays off: 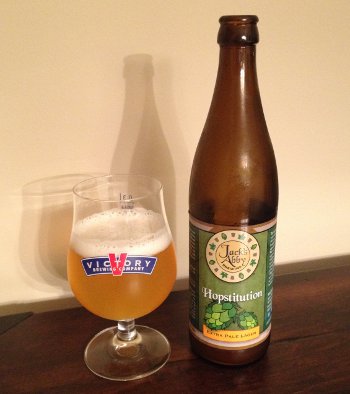 Jack’s Abby Hopstitution #4 Aussie Rulez – Pours a slightly hazy, golden yellow color with a finger of white head that leaves lacing as I drink. Aroma is beautiful, tons of tropical fruit hops. Taste is somewhat less powerful than the nose implies, though there’s plenty of hop flavor to go around, with less bitterness than expected. Mouthfeel is crisp and clean, light bodied, quaffable. Overall, this actually might be my favorite Jack’s Abby beer yet. B+

I also had a Session Rye IPL from my little Vermont Trip that was pretty darned good. I suspect Jack’s Abby would be a regular purchase if they were local, and I should really figure out a way to try some of the more sought after brews…