We’ve already established that Chad Yakobson is a mad scientist who makes all of his beer using various strains of Brettanomyces. He’s a fan of wild yeast, and apparently also a fan of Luis Buñuel’s surrealist films from the 1930s:

The idea spur for the name of this beer came from a 1930′s Surrealist film L’Age d’Or by Luis Buñuel and written by himself and Salvador Dali. In the opening scenes footage of scorpions are shown from a short science film. During this are captions in French talking about 5 prismatic articulations which finally culminate in a stinger.. For this reason we chose to use 5 prismatic strains of Brettanomyces for our surreal golden sour and name the beer L’Brett d’Or “The Golden Brett”.

The movie is on YouTube, if you dare. Lord knows I’ve not seen enough Buñuel, and there’s no time like the present.

So primary fermentation with 5 strains of Brett (picked to emphasize “citrusy type characteristics”), then a dose of Lactobacillus (a bacteria that produces sour flavors in beer) and a lengthy nap in old Napa Chardonnay barrels. Sign me up: 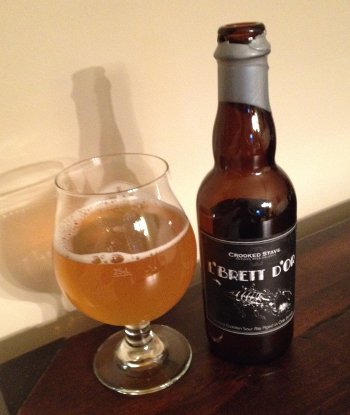 Crooked Stave L’Brett d’Or – Pours a yellow color with half a finger of fluffy white head that nonetheless sticks around a while. Smell is pure funk, earthy, fruity Brett, and a light but well matched oak note. Taste follows suit, lots of funky Brett, some earthiness and oak up front, followed by a strong tart fruit sourness. The oak is a really nice presence throughout the taste and helps keep that sourness in check. Mouthfeel is a bit light on the carbonation, but it still works very well. It’s bright and refreshing, with a pleasant acidity. Overall, this is yet another fantastic effort from Crooked Stave. A-

It’s pretty amazing that a brewery can sustain itself by brewing only wild beers, and I’m definitely going to be on the lookout for more from them. In fact, I have another of their beers just sitting on the shelf, ready for drinking. We’ll get to it soon enough.