It’s time to play Acronym soup. Black Maple Hill, or BMH, is what’s known as a NAS NDP Bourbon. I gather that these are not normally good acronyms to have attached to your Bourbon, and yet this sucker seems to be highly sought after. Let’s break it down, shall we?

NAS means Non-Age Statement, meaning that the bottle does not indicate how long the bourbon was aged in barrels before being bottled. I don’t want to start a holy war here, but while most higher end bourbons tend to be 6 years or older, there’s a popular notion that the older a whiskey is, the better it will be. This is probably not the case (I’ve heard that 6-10 years is the sweet spot, but then, tastes vary, and some folks lover their old bourbon), though obviously older bourbon is more scarce and thus probably more desirable. Those in the know seem to put BMH in the 8 year or so range, but then, how would we really know? It’s labeled as “Straight” bourbon, which means it’s at least 2 years old, though that’s not really much help. Purists don’t like NAS stuff, especially when something used to have an age statement and then dropped it. There’s no real corollary to beer here, as most beers aren’t made to age, though I guess we could talk about packaging dates on bottles, which to beer purists can be very important for styles like an IPA (except in this case, freshest is best).

NDP means Non-Distiller Producer, which basically means that Black Maple Hill is not actually a distillery. There’s a company in San Carlos, CA that pays Kentucky Bourbon Distillers (KBD) to make a blend, then slaps a (rather beautiful) label on the bottle and sells it as his own. KBD doesn’t actually make the whiskey either, they just purchase stocks from actual distillers, blend it, and bottle it. The knock against NDP bourbons is that you generally have no idea where the bourbon actually came from, and in the now-booming bourbon market, supply is becoming constrained. Rumor has it that Heaven Hill supplies KBD and thus BMH, but who’s to say how long that will last or if it’s even true in the first place? Again, purists tend to look down on this behavior (unless the NDP does claim specific provenance, like when Jefferson’s does bottlings of Stitzel-Weller juice). I liken this to the stigma attached to contract brewing in the beer world. There are, of course, exceptions (especially since craft beer has really taken off), and there’s the fine line between Gypsy Brewer and Contract Brewer, but NDP seems a little more shady to me.

So when you combine NAS and NDP, you see something that’s not very appealing to purists. Not that it stops people from buying the stuff. Supply is apparently constrained all over the country, and people are asking if it’s the next Pappy (regularly referred to as the “best” and thus impossible to find). Me, I strolled into a PA state store and picked one up right off the shelf. I’d heard of it, and knew it was popular, but didn’t really know any of the above. I suppose I was lucky too, as it’s not something I’ve seen since then.

So why the hype? Near as I can tell, Black Maple Hill is one of the older NDPs that are still putting out bottles today, and their early stuff was supposed to be legendary. Before the current boom in whisky, distillers had a glut of unsold bourbon and so NDPs had no problem sourcing good stock. Indeed, early BMH was bottled by Julian Van Winkle III himself (for the uninitiated, Van Winkle could probably bottle his tapwater and sell it for $100 a pop), but that connection is long since gone. Perhaps the glowing aura of Van Winkle really does cast a long shadow, or maybe scarcity is what’s driving demand. Oh, and people seem to really like it to. There’s also that. Like I always say, it’s what’s in the bottle that counts. That being said, I was unimpressed. This is the opinion of an admitted newbie with little experience in the area, so take that with a huge grain of salt, but I have to admit that I preferred several other bourbons to this (and those were all much cheaper than this too). 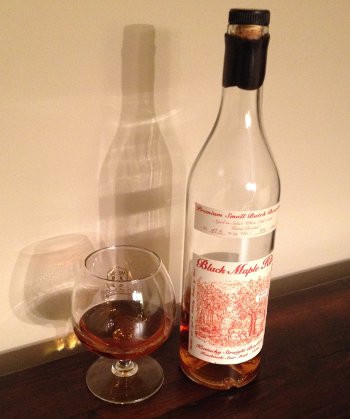 Black Maple Hill – Apologies in advance for what I’m sure are terrible tasting notes. I don’t quite have the vocabulary down and fall back on my beer tasting instincts here. Golden orange color, pretty typical Bourbon appearance. No head at all! Smells pretty corny, not much in the way of spice, just sweet corn, some caramel, maybe a hint of dark fruit, but I have to really reach for that. Taste also seems very corn forward, sweet, not much spice at all, caramel corn, maple syrup, booze. As it opens up, I can get maybe a bit more spice out of this, but still not much. Mouthfeel is relatively light, a little boozy heat, but about what you’d expect from something like this. Goes down pretty easy. Overall, I’m finding this to be rather straightforward and definitely not worth the premium price. It’s certainly drinkable (as evidenced by the mostly depleted bottle) but I wouldn’t recommend it unless you already know you like it. I drank this neat with no water added, but I have to admit that a good portion of the bottle was drank after I had a big imperial stout (or something like that) and I just poured a quick dram of BMH into the unwashed glass. I will say, I rather like the confluence there and think I should experiment further with blending tiny amounts of beer with whiskey to see if I can make something more interesting. But I digress. I’ll give this a B-

Bourbon Nerd Details: 95 Proof, 47.5% ABV bottled (750 ml black wax, orange label). Drank out of a snifter on 3/7/14. Bottle is almost gone at this point, but the above notes are representative of earlier tastings.

Beer Barrel Potential – I have to admit that I have no real basis for answering this question, but it’s an interesting one and I like engaging in wild speculation. Again, take this with a huge grain of salt. So would the barrels used for BMH be good for a secondary use with beer? The only thing I’d worry about is that the corn forward note wouldn’t stand up to a big imperial stout (9% ABV stouts might work better, but still). Barleywines might work well though, and maybe something like an Old Ale or Scotch Ale would work too. To my knowledge, no beer has used BMH barrels, but given the unclear provenance of the juice, who knows? Heaven Hill is certainly a big supplier of barrels to brewers (including heavy hitters like Goose Island, Firestone Walker, and the like).

So there you have it, my first bourbon review. Next up on the bourbon train is Four Roses, see you Thursday.