In the Anglo-Russian slang of A Clockwork Orange, the word “Moloko” means milk, hence Three Floyds brewing a milk stout and slapping a Clockwork Orange-inspired label, right down to the swelled up font and the suspenders. It’s my favorite of Three Floyds’ labels, gorgeousness and gorgeousity made flesh, but as always, it’s what’s inside the bottle that counts.

In the book and movie, the drink is actually called a Moloko Plus, which is milk plus drugs. Alex and friends go to “milk bars” to drink up and prepare for a little ultra-violence. Sometimes Three Floyds’ beer is also referred to as Moloko Plus, which is mildly disturbing, but my bottle sez nothing of this “Plus” and I didn’t get anything more than a little buzzed from drinking it. As far as I’m aware, at least. So gather round, my droogs, it’s time to head to the milk bar for the ol’ in out (er, um, ok, maybe that metaphor doesn’t exactly fit here. Heh, I said “fit”. Ok, let’s just drink this stuff.) 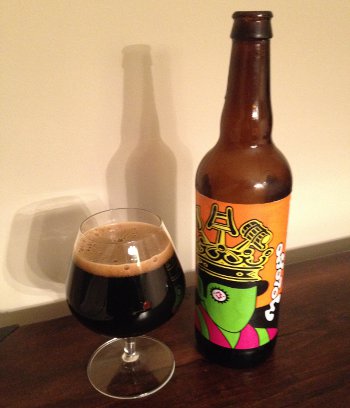 Three Floyds Moloko – Pours a deep, dark brown color, almost black, with a finger of light brown head. Smells sweet, definitely got that milk stout character down pat, light on the coffee, chocolate, and roast, but those components are there. Taste is very sweet, some coffee and chocolate, very light on the roast, lots of lactose sweetness though. Mouthfeel is very smooth, well carbonated, full bodied but not as overbearing as it could have been (not as chewy as I expected, and this is a good thing), probably the best part about this brew, actually. Really easy drinking despite the sweetness. Overall, what we’ve got here is an above average milk stout. B+

Another solid brew from Three Floyds, and unfortunately, the last of the booty from my Chicago trade (never fear, we’re planning a winter trade for some barrel aged Revolution, which is exciting).