Another Belgian Strong Dark from Ommegang, I wasn’t sure if I’d go for this “extremely limited” release, but dammit, they put it in a tin canister thingy and I’m powerless against fancy packaging. So here we are. I’m not sure exactly what makes this worthy of their 15th anniversary, aside from the fact that it’s big and dark and strong. They claim it’s unlike any other ale they’ve brewed, but I can think of two obviously similar beers in their lineup. How does this stack up to the solid but straightforward seasonal Art of Darkness? Or, for that matter, the admittedly unique and most excellent staple beer that is nonetheless big and strong and dark, Three Philosophers? Only one way to find out: 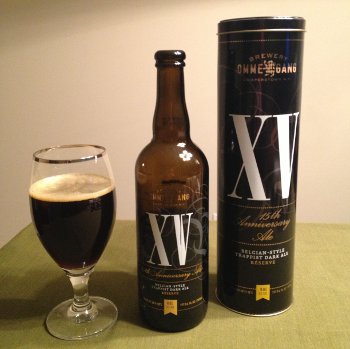 Ommegang XV – 15th Anniversary Ale – Pours a dark brown color with amber highlights and half a finger of bubbly tan head. Smells faintly of Belgian yeast, a little spicy with biscuit and maybe a hint of fruit. Taste is sweet, lots of spice from that Belgian yeast, some caramel, a non-roasty chocolate character that’s really nice and perhaps unique (definitely sets it apart from Ommegang’s other Belgian Strong Dark styled beers). Mouthfeel is well carbonated, almost but not quite effervescent, medium bodied, relatively dry for such a big beer, though there’s a bit of stickiness in the finish. It’s all rather well balanced though, and that’s a good indicator that Ommegang is hitting on all cylinders. They’re at their best when they’re doing stuff like this. Overall, an easy drinking, very well balanced, complex brew, worthy of a look, though it’s a pretty steep price tag. A-

Ommegang has recently gained some notoriety for partnering with HBO to create a series of Game of Thrones beers. The first beer looks to be a relatively ho-hum affair, a 6.5% blonde ale. Certainly will be approachable for the non-beer-nerd fans of the series, but I’d be more excited if they did something really wacky. I can’t say as though I’m excited by this. I like Game of Thrones fine, and Ommegang was the brewery that got me into beer, but somehow this combination isn’t doing it for me. I suppose it will prove beneficial to both companies though, and as corporate tie-ins go, this is much better than most. I do wish success on Ommegang though – maybe if they can make enough money, they’ll start an actual sour program or something (they’ve made overtures in that direction in the past, but nothing regular).