How is it possible that I’ve only had (and reviewed) two Lost Abbey beers since starting this blog? I’m really at a loss to explain this. I love me some Belgian style beers, and there are only a few American breweries that really specialize in that realm, so I’m not sure about the cause of my neglect. It’s not like the stuff isn’t readily available in my area, so I figure I should rectify this situation before the beer dork police knock down my door and confiscate my beer.

Lost Abbey shares its facilities (and staff, including head brewer Tomme Arthur) with Port Brewing and in a very real sense, they’re simply two different approaches taken by the same brewery. Lost Abbey is inspired by the monastic brewing traditions of Belgium, but since no actual Abbeys were harmedinvolved in the production of the beer, they called it a “Lost” Abbey. They’ve got quite a good reputation and a large catalog of beers that, again, I should really become better acquainted with… 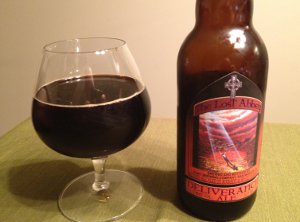 Lost Abbey Deliverance – Pours a very dark brown, almost black color with a practically non-existent head. The nose is full of caramel, oak, and vanilla, with plenty of booze – the bourbon and brandy are apparent. The taste delivers what the nose promises. Caramel, oak, vanilla, brandy, bourbon, and booze, booze, booze. Mouthfeel is smooth, thick, and chewy, barely carbonated… but there’s enough to make it palatable. Lots of hot booze and warming alcohol character, making this a beer I want to sip and savor slowly. Overall, a wonderful beer, perhaps even better than the simple Bourbon Barreled Angel’s Share (though that may be more due to the age or bottling than the blend). A-

I actually have a bottle of the bourbon barrel-aged Angel’s Share in the cellar. Given that I found it a bit “hot” on the first go around, I thought I’d give it some more time in the cellar. In the meantime, I certainly have a lot of other Lost Abbey beers to get through, so while I don’t currently have any in the pipeline, I’ll almost certainly be hitting some up this summer.