One of the great things that Russian River does is make their bottle logs public. The batch number is clearly labeled on each bottle, and you can then look it up in the log and see all the details from the brew date to the strains of yeast used. Interestingly, a lot of their beers have evolved over time, using similar, but distinct formulas.

This particular beer is interesting and distinct from the rest of Russian River’s offerings in that it is completely, 100% fermented with Brettanomyces. Brett is a wild yeast strain that is apparently the bane of winemakers’ existence, but when used properly in beer, it can impart an earthy, funky character that many find pleasant. Most wild beers are primarily fermented with typical ale yeast strains, then dosed with Brett (and usually additional bacteria) later, but in this case, it was Brett all the way. Indeed, looking at the bottle logs, it appears that the particular strain they use is called “Dr. Dre Brettanomyces”… I have no idea what they’re referring to there – perhaps it’s a house strain they’ve stumbled upon? – but I’m pretty sure it’s not available commercially! 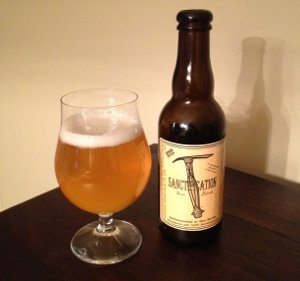 Russian River Sanctification – Pours a cloudy golden yellow color with a finger of white head. Smell is very sweet, almost like… bubble gum? It’s actually quite nice, whatever that aroma is… The taste is very sugary sweet, with a funky tart lemon character coming out in the middle and drying out in the finish. It’s sour, but not overpoweringly so, certainly a lot less than Russian River’s barrel aged sours. Mouthfeel is heavily carbonated but light, crisp and refreshing, and finishes dry. The tartness restrains drinkability a bit, but it’s still quite an easy going beer. It would actually make a great introduction to the world of sours. Overall, very well balanced and approachable, but still complex and interesting. A-

Russian River continues to impress, and I’m always on the lookout for something new from them. Here’s to hoping that bottles of Beatification make their way over here someday soon…