One would assume that a Doppelbock grew out of the single Bock style, but apparently not. Doppelbocks have their roots in monastic brewing, and it was after the beer became secularized that goat-loving drinkers1 began to notice similarities between these beers and regular Bocks. Apparently, a bunch of drunken Italian monks2 found their way to Munich and began brewing this extra strong beer to sustain themselves during the fasting periods of Advent and Lent3. Full bodied with a rich, chewy malt character, these beers became known as “liquid bread”.

Their beer was called Salvator (translates to “the Savior”) and the Monks kept it to themselves for over a century. Once they began selling it to the public, that’s when the whole Doppelbock moniker came up, though interestingly enough, other breweries who copied the beer called the style “Salvator” too. Eventually trademark protection forced those other breweries to come up with new names for their beer, though many try to keep it traditional by using words that end in “-ator”, including new takes on the style like today’s example: 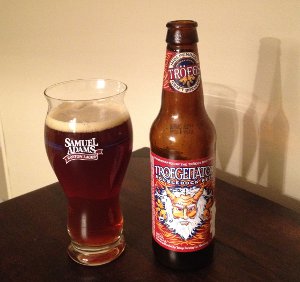 Tröegs Troegenator Double Bock – Pours a deep, dark amber color with hints of ruby and a small amount of light colored head. Smells of caramel malt with a yeasty note, maybe a hint of fruitiness as well. The taste tends towards those caramel malt flavors, though it’s a bit muted. Clearly there and very sweet, but not overpowering either, and while there’s no real hop character to the beer, it’s balanced enough not to be cloying either. Mouthfeel is smooth with just a bit of richness filling out the body, making this easier to drink than a sipper, but not quite at the level of a super-quaffable beer either. Overall, this is a solid beer. Not a ton of complexity, but quite nice for what it is. B

Tröegs continues to be an interesting semi-local brewery. I enjoy trying their beers, but I’ve rarely been blown away… though I will admit that Nugget Nectar has grown on me quite a bit and I’m always on the lookout for new beers in their Scratch series….

1 – For the uninitiated, “Bock” means “Goat” in German. Like a lot of beer origin stories, there are a few interpretations of where that comes from. One is that it was a shortened, mispronounced version of Einbeck, a city famous for its beer. Another is that the beer was often brewed in the Capricorn (symbolized by a goat) timeframe. Regardless, that’s why you see a lot of goats on labels for Bocks and Doppelbocks.

2 – These monks were from Paula, Italy, and became known as Paulaners… a name that exists to this day, though the brewery seems to have been secularized.

3 – Yeah, I probably should have posted this on (or before) Easter, eh?