It occurs to me that I have not explained my grading system at all, and for the most part that’s because it’s a bit of a nebulous thing. How do I know something is an A (or an F or a B- or whatever)? To paraphrase Justice Potter Stewart1, I know it when I see it (or, in this case, drink it). Then again, most beers could probably shift a level one way or the other and still be valid from my perspective, and I’ll admit that a big part of this is just a sorta gut feeling. That being said, I have some definite guidelines that have been brewing2 in my head over the course of the year and a half I’ve been running the blog.

I’m not entirely sure why I chose the letter grading system this time around, but it probably had something to do with the fact that most of the folks I read used that scale and at the time, Beer Advocate was using letter grades too (they’ve since moved on to a much simpler system comprised of, like, 13 different values, all weighted and averaged on a logarithmic scale to yield 3 separate ratings that you must analyze separately and together in order to get a broad snapshot of what a bunch of strangers think about the beer3). Plus, I’d never used it before myself (I use 4/5 stars for movies and at some point I had a 10 point scale for books, though I’ve reverted back to stars).

One thing I’ve realized that might be important when considering the below is that, well, I was a huge nerd in school. Not super-genius nerdy, but let’s just say that anything in the C range was unwelcome in my household (I got a C+ one one report card once and my parents grounded me for a month). Low Bs weren’t exactly favored either. It’s been a long time since I’ve been in school, but I think you can still see that bias seeping through my ratings. The other thing you’ll notice is that I tend to avoid the extremes. Very few A+s and, correspondingly, very few Fs. Most of the stuff will be in the middle of the pack. Anyway, let’s get this party started:

And to further demonstrate my nerdery, I’ve graphed the number of ratings I’ve given out. This is only really an approximation, as I’m using the post count rather than looking at individual beer reviews. This means that posts that feature, for example, 2 B ratings, will only count as one on the chart below. And if you look at those posts, there often are multiple Bs and B-s, etc… Anyway, here’s my dorky chart: 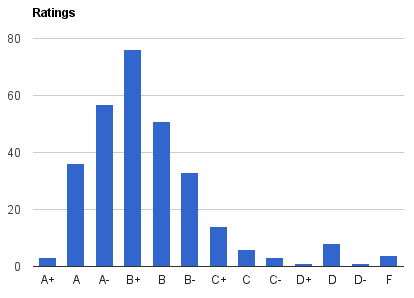 Not quite a perfect bell curve and the peak is probably centered on too high a rating to be statistically sound, but I’m not that much of a nerd, so I’ll just say that I think this is a rather fine distribution. I suspect that my hesitance to rate along the extremes (i.e. A+ and F) will continue unabated.

1 – Did I just reference a Supreme Court ruling in a freakin post about beer rating? Well, yes I did, and I normally try to avoid devaluing the Supreme Court by applying their rulings to the trivialities of my life, but I don’t feel that bad about it this time because the court case in question was about pornography (for the record, I know that when I see it too.) I should probably just chill out and drink a beer rather than whine about ratings and the Supreme Court.

2 – Tee hee! Get it? Oh, you’re annoyed that I made a whole footnote just to giggle at a lame pun? Well, fine then. Be that way.

3 – Ok, so it’s not nearly that complicated. I just miss the letter grades. It was sooo much easier to tell at a glance what a bunch of strangers thought of a beer. Now I have to, like, do calculations. And why do their beer listings use a different, 5 point scale? Pick a scale and stick to it. Or make them all available all the time. Ungh.

2 thoughts on “The Grading System”