Just who is that lovely lady on the label of this beer? Looks like a Victorian era painting… According to Founders, she’s Dark, Rich, and Sexy. Or maybe that’s the beer they’re talking about… 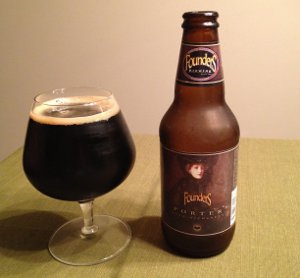 Founders Porter – Pours a dark brown color with a finger of tan head. Smells strongly of roasted malts, with some coffee and maybe even chocolate thrown in for good measure. Really nice nose. Taste starts sweet, maybe with some of that chocolate, but it gets drowned out by a heaping helping of roasted malts and coffee flavors starting in the middle and intensifying through the finish. A bitterness (which seems to come from more than hops, perhaps from those dark malts, with all their coffee and dark chocolate character) emerges in the finish as well. This ain’t an imperial stout or anything, but it packs a ton of flavor in a relatively small package. Mouthfeel is well carbonated and reasonably full, and it finishes dry. Overall, while porter is not one of my favorite styles, this is exceptionally well executed and one of my favorite examples of the style. B+

Several months ago, I had bought a Founders variety pack, so I had a few of these floating around. At first, I didn’t care for it, but it quickly grew on me, and now I feel like it could be a go-to beer in some instances. Another thing I’ve found is that this beer goes really well with a good cigar. I’m no cigar expert and don’t smoke them very often, but those roasted malt flavors match quite nicely with, uh, smokey flavors from the cigar.

Anyways, I’m thinking that Founders is one of the all-around best breweries in the country, and while I’ve had my fair share of their standard beers, I should really seek out some of the more obscure stuff and seasonal releases.