So I’ve spent the past couple months trying to drink down my cellar and one of the things I’ve realized is that there’s a reason I don’t drink a lot of that stuff right away. They’re mostly high-gravity face-melters (often barrel-aged and beyond 10%) to the point where I feel like that Nazi guy at the end of Raiders (not the fascistic part, just the part where his face melts).

As such, I’ve been craving something a little less rich. Something that won’t make me want to go to bed at 8 pm. Something that won’t obliterate my palate with rich, chewy flavors. Don’t get me wrong, I love the deep, full-bodied flavors of a bourbon barrel aged beer, but you know, sometimes I want to be able to drink a second beer in one night. Usually I turn to my homebrew on such occasions, but even then, most of my stuff is around 6-7.5% range. That’s not exactly face-melting territory, but it’s also a bit too much (I keep saying that I need to recap those beers, and I will, but for now, I’ll just say that something like my 6% stout still ends up being a pretty heavy, rather unsubtle beer). Beer nerds know what this all means: I need to drink me some British styles. I’ve had some really low gravity English-style beers of late, and it’s been nice. This one’s a brown ale that’s actually a bit on the high range of what I was looking for, but it was still nice: 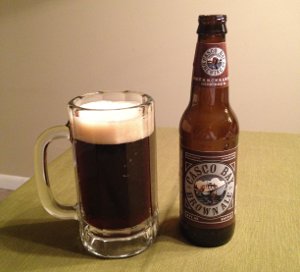 Casco Bay Brown Ale – Pours a deep brown color with a couple fingers of light tan head. Smells of caramel malt along with a nutty aroma and maybe just a hint of something along the lines of brown sugar. Taste features a lot more of that nutty flavor, along with some caramel malt and a surprisingly bitter finish. Nowhere near an IPA or a, er, Brown IPA or anything, but it’s there. As it warms, it smooths itself out a bit. Medium to full bodied, lots of carbonation, not a big-gulp kinda beer, but pleasant enough. Overall, it’s not lighting the world on fire, but quite frankly, that’s not what what I needed right now. I suppose even in that realm, it’s not a top-tier beer, but it hit the spot for me, and the world was spared a face-melting cataclysm, so there’s that. B

I’m pretty sure the Portland, Maine brewery doesn’t distribute much outside of the New England area (this bottle was a gift from my uncle, who frequents the region), but I’d be inclined to check out their Winter Ale if I ever got the chance… And their flagship Irish Red might tide me over the next time I get overwhelmed by the bourbon-barrel giants.