My first beer of the year and I may have just shot myself in the foot. I mean, yeah, January 1st just another day and our penchant for creating end of the year lists is an entirely arbitrary practice, but still. This sets the bar pretty high.

Trappist Westvleteren 12. The fabled Westy 12. Both Rate Beer and Beer Advocate have it ranked as the #2 best beer in the world, and it’s been there for a long time. Indeed, it is often in the #1 slot, occasionally falling to a Pliny the Younger or Kaggen Stormaktsporter. In short, it’s a legendary beer.

Of course, it’s impossible to get. Almost literally. To buy a case of it, you have to fly to Belgium and even then you have to jump through all sorts of hoops, calling the Monastery at the magic time, going to the secret pickup place at the secret time, doing the elaborate 42 step handshake with the attending monk, ducking below the booby traps (Only the penitent man will pass!), then bribing the airport baggage handlers so they don’t just “lose” your package, and so on. Apparently the monks also sell some bottles to their local cafes, so you can get one there too, but for most of us, the Westy is a pipe dream. Why do they do this? Well, the monks at the Saint Sixtus Abbey only sell their beer in order to financially support the monastery (occasionally, they will also use their earnings to support a charitable cause). This means not much beer is made, and apparently the local folks like this stuff too, so it sells out quickly. Go figure.

How did I get one? Let’s just say I’m a weak, weak man. I bought a “collectible bottle” that just happened to be unopened. Wink, wink. I feel a little bad about it, but not really. It was expensive but not obscene (the way a lot of “collectible bottles” are), and it’s pretty much the only way I’d be able to actually get my hands on one of these things. Ok enough preamble, let’s do this: 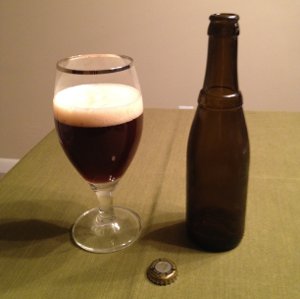 Check out that bottle. You’ve got to love a brewery that’s so badass it doesn’t even need to put labels on their bottles. The only real identifier is the gold cap.

Pours a cloudy dark brown color with a finger of white, fluffy head. Smell is strong with dark fruits – raisins and plums – along with some bready Belgian yeast. The taste has that same dark fruit character to it, very strong and rich flavors, sweet, well matched, a little booze, and a nice dry finish. The mouthfeel is absolutely perfect. Full bodied, a little chewy, but very easy to drink. Perfectly balanced carbonation that lasts throughout the entire taste. There’s a little booze in there, but its true strength is hidden well by the rich flavor profile. Overall, an exceptional beer. A 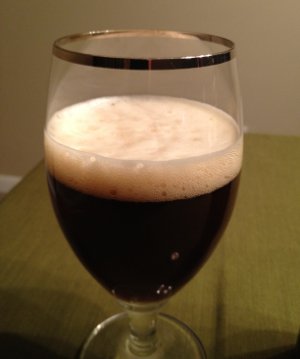 So is it the best beer in the world? Probably not, but it’s up there. I mean, I’ve only had the one and it was superb, but I’d like to try it a few more times before I put the best in the world label on something. I suspect even then it wouldn’t be at the very top of my list (though perhaps a top 10 slot would be fitting). Heresy? Maybe, but who really cares? When you get to beer that is this good, it doesn’t really matter how you rank it. I’ve also got a bottle of the less infamous but just as hard to get Westy 8 that I’m hoping to crack open this weekend, so look for another review soon!