So I’ve already mentioned that Oskar Blues is famous for using cans, but what I want to know is when we’re going to start seeing specialty cans. It’s pretty common to see fancy special editions of bottled beers, using expensive looking foil or wrapping it in paper or pouring wax over the top, sealing in the goodness. So how long until we see different treatments for cans*?

I did a quick spin around google looking at reviews for Ten Fidy, Oskar Blues’ 10.5% ABV (get it? Ten FIDY! It’s very hip.) imperial stout, and the general consensus seems to be that people are absolutely amazed that someone would put an imperial stout in a can. ZOMG! Lots of people mention the viscous, deep black, almost used-motor-oil appearance, which just makes me think that someday, we’re going to see old-timey oil-can style packaging (complete with an independent spout that you have to jam into the can to open it) for a beer like this. There are tons of other creative cans that could be made as well. Of course, many of them negate some of the advantages of cans, but it would still be interesting.

But enough about packaging, let’s look at what’s in the can: 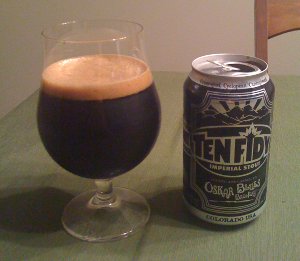 Oskar Blues Ten Fidy – The can says “One-eyed, Cyclopean, Concupiscent” and I don’t really have any idea what that means except that perhaps it’s, like, really big and powerful and that people really want it. Or something. Pours a deep black color with a finger of brown head. I know a lot of beers appear black, but this one is amazing – it absorbs all light, no highlights, full stop. It’s like drinking a black hole. Smells of chocolate, caramel and just a little roasted malts. Tastes very sweet with rich flavors of chocolate and caramel present. The roastiness is more prominent in the taste than the nose, but not overpowering. Not super strongly carbonated, but still full bodied. It’s actually pretty smooth. The alcohol is present, but pretty well hidden given the 10.5% ABV. Overall, a pretty great imperial stout. The bold flavors seem to hold up well with food and can even compete with a cigar… A-

Apparently Oskar Blues makes hot sauces of their beers, and the one they make for Ten Fidy has some ridiculous amount of scovilles (like, in the millions) Not sure if I actually want to try that, though I do really like hot sauces, so if I ever see some, I might check it out…

* Ungh, it seems that the macros have experimented with this sort of thing already (the miller aluminum pint is nice looking, actually), though nothing quite as out-there as what I was suggesting…