Reason for existence? Not quite, but it is one of Dogfish Head’s year-round (and oldest) brews. It was supposedly brewed to match with “wood-grilled steak” but I think Sam just came into a few tons of bulk raisins and said, “Fuck it, we’re making a brown ale with a shitload of raisins. Hey, does anyone know of a shitty raisin pun we can use for the beer name?”* In any case, by pure chance, I actually was having a steak (not a “wood-grilled” one though) whilst drinking this. 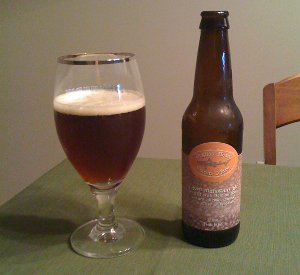 Raison D’etre – Pours a clearish dark amber color with a finger or two of light colored head. The smell is a bit strange to me. I think I can pick up some of the raisins that were used in brewing, and there’s some Belgian yeast (though not as much as I’d expect), but there’s a strange twang in the nose too. The taste is very sweet, lots of residual sugars here, and there’s a distinct alcohol flavor as well. It’s got some brown ale style flavors going on as well – just a hint of roastiness, maybe some caramel. It’s got a medium body and rich flavors, but when you put everything together here, it seems a bit unbalanced. It’s clearly complex, but I feel like there’s something missing – maybe overpowered by the rest of the beer. It’s certainly not bad, but perhaps my expectations from the Dogfish Head folks were too high. B-

I’ve got a couple of other bottles of Dogfish Head stuff laying around that I’ll get to at some point, including their Squall IPA (which I think is basically just a bottle conditioned 90 Minute IPA) and the most excellent Palo Santo Marron.

* In case you can’t tell from previous posts, I like to think of brewers as foul-mouthed maniacs. It’s funnier that way, but no offense intended. I kid because I love.