I like Scotch, though I should also note that I’m certainly no expert. I pour myself a dram every now and again, and drink it slowly, attempting to pick out flavors. But then I read Water of Life and, to be honest, I don’t really perceive the distinctions of flavors the way they seem to… On the other hand, that’s how I felt about BeerAdvocate reviews up until about a year ago, when I started getting serious about this whole beer thing, so perhaps there’s hope for me yet.

In any case, those wily Scotts do more than make great whisky*. There’s a whole continuum of Scottish ales, ranging from light to heavy strength and historically designated in shillings (which at some point corresponded to a price of a barrel, but the specifics seem unclear). The strengths roughly correspond to the strengths of English bitter, though at the higher end, things get a little more confusing. At higher alcohol levels (approx. 6% and higher), the beer is simply called a Scotch Ale or a “Wee Heavy”. The origin of the phrase “Wee Heavy” is a bit difficult to pin down, but as near as I can tell it refers to the historical serving size of 6 fluid ounces (about 1/3 of an imperial pint). A “wee” glass of “heavy” ale, as it were.

Because Scotland is further north and because of their… complicated… relationship with England**, these beers have some interesting historical characteristics. The cooler climate was not that conducive to growing hops, which meant that they needed to import them from England. As such, Scottish ales were generally lightly hopped. Tee hee. The lower temperatures also impact fermentation, meaning that these beers display less in the way of fruity or spicy flavors. Add all this together, and what you’ve got is a beer that emphasizes the malt (while yeast and hops generally take a back seat), sometimes even featuring peat and smoke, which seems appropriate for the land of Scotch whisky.

Of course, these days, the historical style isn’t quite as rigid and Scottish brewers seem to be doing some interesting things (particularly BrewDog, who certainly don’t seem to be very opposed to importing hops!) and of course, us American heretics are having our way with the style. Enter Founders’ take: 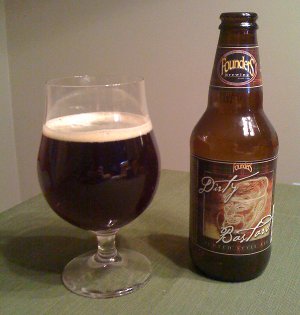 Founders Dirty Bastard – Pours a deep reddish brown (mahogany!) color. Very dark, almost opaque, but when held up to light, you can see the red colors getting through. They head is very small and dissipates quickly. Smell is very distinctive. Despite my babbling above, I’m not very familiar with the style, but it seems to be appropriate for Scotch Ales, except perhaps for a tiny smattering of grassy hop aromas, which I understand are a bit unusual. Taste has a similar distinctive scotch ale flavor. Very sweet (but not fruity) with some light roastiness (or is that smoke?) in the finish. It almost tastes like something from the Bock family or maybe a European barley-wine. Some earthy hops are present, but it’s subtle and not very bitter (despite the 50 IBUs which, again, is a bit high for the style, though certainly not enough to overwhelm the ample malt backbone and sweetness of the beer). Full bodied with light but appropriate carbonation – surprisingly easy to drink. For a strong beer, the alcohol is very well hidden. In the end, it’s rich, complex and tasty. B+

I will make arrangements to try more of this style, though none are in the pipeline at the moment. I think, perhaps, some double features are in order here though, perhaps even mixing with some Scotch whisky to see if I can start to pick out some of the more subtle similarities.

** I should probably make some sort of William Wallace joke here. Or maybe a Mel Gibson joke. But that would be too easy***.

*** And by “too easy”, I mean that I had already written the grand majority of this post before I realized the Wallace/Gibson angle and don’t feel like fitting it into the post right now. Irony!****

**** Also, I’ve apparently been listening to Scottish hip hop for the past half hour or so. Go figure. Also of note: blatant abuse of asterisks.