In Pennsylvania, if you want a Yuengling, all you need to do is ask for a “lager”. This seems to amuse outsiders quite a bit, but for us, it’s just normal. Yuengling is pretty much my default beer. It’s available everywhere, it’s dirt cheap, and it actually tastes good (a thousand times better than macro beers like Bud, Miller, etc…). I’ve drank so many of these that I don’t know that I can really write a review, as its taste is pretty much hardwired into me. I take a sip, the muscle memory kicks in, and I grin. Does it knock my socks off like something out of a Trappist brewery? Well, no. But I can drink 6 of these without having to take out another mortgage. And I can actually find them in a bar. (I’ll give it a B.) 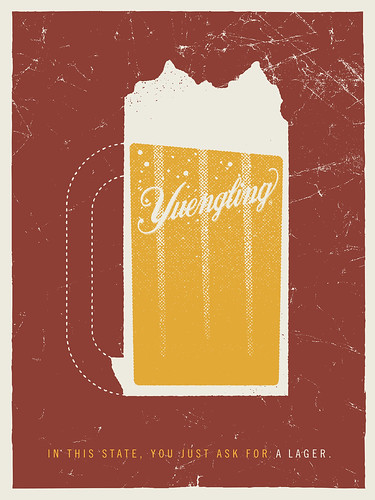 Once you leave PA, it doesn’t seem anywhere near as ubiquitous, though everyone seems to enjoy it. Friends at school would often load up their cars on the way home, not just so they had their own secret stash, but because their pops wanted some too. (Of course, when the default beer at college is Natural Light, Yuengling actually does seem like some sort of Trappist rarity, but I digress.) There’s something about the Yuengling brand that’s just endearing. Perhaps it’s the storied history – it is America’s oldest continuously running brewery, after all. Or maybe it’s just local pride. Whatever the case, it seems to strike a chord with people around here. Would it continue to do so if the brewery expanded their distribution?

A few years ago, Yuengling expanded their operation to Florida, effectively covering the entire east coast. I remember seeing it on tap in Florida once and being shocked (alas, they didn’t quite have the “lager” lingo down, earning me a confused look from the bartender). I assume west coasters have never even heard of it. Well that will probably be changing soon:

Now, the fifth-generation brewing scion and sole owner is poised to make his riskiest move yet to expand the nation’s oldest beer maker. Yuengling (pronounced ying-ling) announced last week that it signed a letter of intent to buy a former Coors brewery in Memphis, Tenn. The facility would be the Pennsylvania brewer’s largest and could more than double the company’s overall capacity and allow it to expand distribution into multiple states beyond its 13-state footprint in the Eastern U.S.

Will it make it all the way to the west coast? I wouldn’t be surprised either way. The company is apparently quite conservative when it comes to expanding (which makes sense, considering their longstanding history), so maybe this will just be a mid-west thing. I’d be curious to see how west coasters like this beer though. The storied reputation in this area and limited distribution elsewhere could end up being its downfall if expectations get too high. In any case, if you’ve never heard of it and you start seeing it popping up, give it a shot. It’s not liquid crack or a transcendent experience or anything, but it is a great session beer. (thanks to Jay for the link)

Update: Funnily enough, the beer nerds at BeerAdvocate call this an “American Amber / Red Lager”. I just labeled it as a “lager” without even thinking. Heh. I was also expecting the judgement of the beer nerds to be a bit harsher, but a “B-” is probably about as good as I could ever hope for here.