Canada’s Unibroue brewery has quickly become one of my favorites. If nothing else, they make La Fin Du Monde – perhaps my favorite beer evar. But everything I’ve had from them has been fantastic (or at least worth a try) and thanks to their habit of bottle conditioning (“ale on lees” as they say on the bottles), their beers seem to be available far and wide (and won’t break your wallet either). This one has been evading me for a while, but I finally caught up to a bottle: 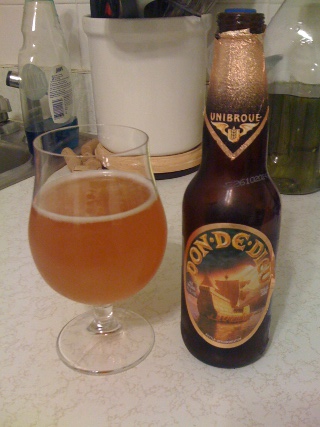 Unibroue Don De Dieu – Translates literally as “Gift of God”, which is pretty audacious, even for French Canadians. While that may be setting the bar a bit high and this beer doesn’t quite reach the heights of Unibroue’s best, it’s certainly a worthy effort and still at the top of the brewery’s offerings. Pours a light, hazy orangish color with a small head. Smells strongly of citrus and coriander/clove (a spicy combo seemingly favored by Unibroue, at least for their lighter beers) with the flavor to match. Good carbonation and nice medium drinkability, which is surprising considering the high alcohol content. BA calls it a Belgian Strong Pale Ale, but Unibroue says it’s an “abbey-style triple wheat ale”. Well, it would certainly place well in either category for me, though again, it’s not quite the perfection that is La Fin Du Monde (though it does have a similar flavor profile). B+