Last time on Weird Movie of the Week we discovered some presidential badassery. This time, we’ve got a ripping tale of aliens, nazis, and lasers: 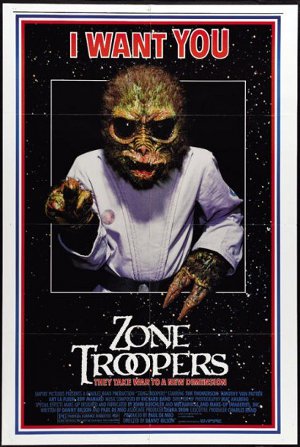 Courtesy of Zach Carlson from Badass Digest, here’s a summary:

Watching Zone Troopers, you get the feeling that it’s accidentally ten times better than it’s meant to be. The plot and dialogue seem like they were written on a comic shop toilet stall: Four likeable WWII soldiers named things like “Sarge” and “Mittens” stumble across enemy lines and the Reich’s most carefully guarded discovery: a massive interplanetary spacecraft. One of its pilots has escaped unharmed, and joins our boys in a full-metal lazer-battle against Hitler’s lil’ shits. We even get to see Eva Braun’s boyfriend get smacked straight in the kisser!

Ah, the 1980s. Apparently this movie is actually real and is available through the magic of Manufactured-on-Demand DVD from MGM. Or something.