Opera is my favorite web browser. I started playing around with version 3.x back in the late 1990s, but at the time, Opera was not free (and I was a poor college student), so I generally used the freely distributed IE or Netscape (with the occasional pre-release version of Mozilla thrown in for fun.) At the time, I didn’t see the point of Opera – it was just another browser, and it had its own quirks that made websites render funny (because web developers never bothered to check their code in Opera, a practice that sadly persists to this day) or not work at all. The only real advantage it had was the multi-document interface (aka “tabbed browsing”), a feature that was not present in any other browser. This was great and all, but not enough to make me want to shell out 40 bucks.

In 2001 Opera released version 5. The big news here was that they had a free version of the browser (though it had these large, ugly banner ads attached), so I could download it and start using it on a more regular basis. The other important thing about version 5 was that it incorporated Mouse Gestures. This was, by far, the most important innovation in web browsing I’d ever seen in a browser, and that feature alone has kept me glued to Opera ever since. Several years have passed, the ugly ads have gone away (the full version is now freely downloadable), and many features have been added – some good (the wand, email support, and a few other things) and some not so much (the baffling Widgets). Opera has remained at the forefront of web browsing, which is pretty impressive considering it’s opponents in the web browsing realm. Anyway, last week they released version 9.2, which includes 1 new feature which I think is fantastic. It’s called speed dial, and it looks like this: 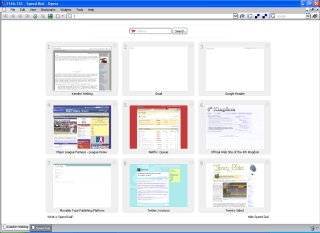 The idea is that whenever you open a new tab, they show you a list of your favorite sites (as configured by you). When combined with Mouse Gestures, this works remarkably well. It’s a simple idea, but I love it.

Opera has maintained itself as a commercial company because it has focused on bringing their lightweight browser to the mobile and embedded market. They’ve done pretty well for themselves too (they’re on a lot of phones, and they’re the browser on the Wii as well). But it’s nice to see that they’re still innovating on the desktop.

There is a bigger question here that will have to wait for some other post, and that’s whether or not Firefox is a better browser. That I haven’t switched yet pretty much tells you where I’m at on this, but I am a little conflicted. Each browser has its strengths and weaknesses, but again, this will have to wait for another post.