Continuing my tour through the realms of unsexy staples brings me to the Old Grand-Dad line of bourbons (a subset of Beam Suntory’s lineup). There are several expressions (most of which are packaged in industrial grade neon orange labels), but they all use the same high-rye recipe (30% rye compared to Beam’s normal 15%), with the main difference being the proof. There’s also Basil Hayden’s, which uses the same recipe and is apparently named after the “Grand-Dad” in question (it used to be an 8 year old bourbon, but they dropped the age statement a while back). That one is also quite disappointing. I’ve seen the fancy bottle with the moderately high price tag in the liquor store and considered it, but I’m glad I opted to get a pour at a bar one night, as it didn’t make much of an impression. I later found out that it’s bottled at 80 proof, which might explain the underwhelming reaction.

What we’ve got here, though, is Old Grand-Dad 114, which is a significantly higher proof than Basil Hayden’s at half the price. I snagged this one last summer during one of my pilgrimages to State Line Liquors, as the name sounded familiar (it turns out that I had been looking at this list Sku posted long ago and this particular recommendation stuck out I guess). Not long after, Josh at the Whiskey Jug reviewed all the Old Grand-Dad expressions (including Basil Hayden’s) and concluded that OGD 114 is “everything that Basil Hayden’s should be but isn’t.” Let’s take a closer look at the OG…D bourbon: 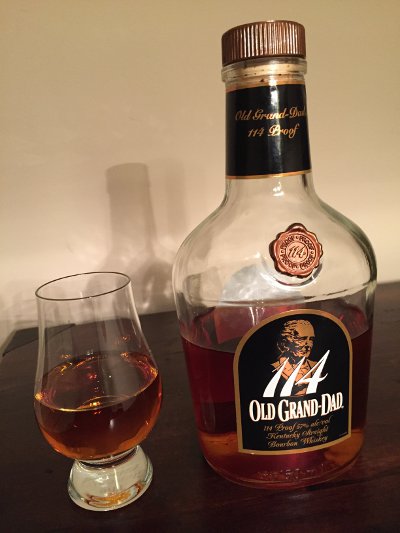 Old Grand Dad 114 – Pours a golden orange, copper color, thin legs. Smells quite nice, caramel, spicy rye, lots of cinnamon, oak and vanilla, maybe something earthy in there too. Cinnamon seems to be the standout here, and every time I pour a glass I love the cinnamon blast (it seems to fade a bit as I drink). Taste follows the nose, but with different emphasis. Some earthy leather, less cinnamon, though it’s still there. Caramel is certainly present as well, but the earthy nature really comes out in the taste. Mouthfeel is rich and a little on the hot side (keep in mind my baby-like beer palate, but I had some higher proof stuff this weekend that felt less harsh than this), coats the tongue and lingers for a bit. Overall, this is really nice. It’s not a mind blowing affair, but it makes for a hefty daily sipper, something I could see hitting often as a reliable go-to when the sub 100 proof stuff wouldn’t get the job done. Certainly blows Basil Hayden’s out of the water, and the low-ish price ($25-30) certainly makes it attractive. B+

Beer Nerd Musings – There are plenty of beers aged in Jim Beam barrels (Allagash apparently favors those barrels), but ones that specifically call out Old Grand-Dad are few and far between. The only one I could really find was from Rock Bottom, ugh (I mean, I haven’t had it so I shouldn’t judge, but a 5.5% ABV stout aged in OGD barrels for 2 weeks doesn’t inspire confidence). As per usual, I’m sure some of the bigger barrel aging programs use these barrels as part of a larger blend, not to mention the large amount of folks who don’t specify which brand of barrels they used (perhaps the notion of OGD being a “budget” bourbon doesn’t lend itself to such marketing efforts). I could see OGD working well though, so maybe someone should give it a shot (looking at you, Fifty Fifty – how have you not used any Beam products in your Eclipse series? Unless you count Maker’s, I guess.). If I didn’t already have my oak cubes soaking in Four Roses, I might have used this for my next BBA homebrew. It seems like it could work well.

Fellow Travelers: Reviews of OGD 114 from folks more knowledgeable than myself…

So that’s the boring bourbon we’ll be covering, stay tuned for some more exciting bottles, including some single barrel Four Roses selections and, why not, George T. Stagg. We’ll also be hitting up some Scotch soon enough. In the meantime, I’ve got a couple of wines to discuss this week…